Retrospective of my last 20 years as AR Researcher (Keynote) 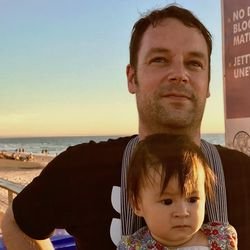 Dr. Christian Sandor is an Associate Professor at the City University of Hong Kong’s School of Creative Media, where he is co-directing the Extended Reality Lab (https://xr-lab.org) together with Associate Professor Alvaro Cassinelli. Since the year 2000, his foremost research interest is Augmented Reality, as he believes that it will have a profound impact on the future of mankind.

In 2005, he obtained a doctorate in Computer Science from the Technische Universität München, Germany under the supervision of Prof. Gudrun Klinker and Prof. Steven Feiner. He decided to explore the research world in the spirit of Alexander von Humboldt and has lived outside of Germany ever since to work with leading research groups at institutions including: Nara Institute of Science and Technology (Japan), Columbia University (New York, USA), Canon’s Leading-Edge Technology Research Headquarters (Tokyo, Japan), Graz University of Technology (Austria), University of Stuttgart (Germany), and Tohoku University (Japan).

Together with his students, he won multiple awards at the premier Augmented Reality conference, IEEE International Symposium on Mixed and Augmented Reality (IEEE ISMAR): best demo (2011, 2016) and best poster honorable mention (2012, 2013). Further awards include: best short paper at ACM SIGGRAPH International Conference on Virtual-Reality Continuum and its Applications in Industry (2018) and best paper at ACM Symposium on Spatial User Interaction (2018).

He has presented several keynotes and has acquired over 2.5 million USD funding. In 2012, he was awarded in Samsung’s Global Research Outreach Program. In 2014, he received a Google Faculty Award for creating an Augmented Reality X-Ray system for Google Glass.

He serves as an editorial board member for Computers & Graphics (Elsevier) and IEEE Computer Graphics & Applications and as a steering committee member for ACM Symposium on Spatial User Interaction and IEEE ISMAR. He has been program chair for numerous conferences, including IEEE ISMAR and SIGGRAPH Asia Symposium On Mobile Graphics And Interactive Applications.

A spin-off of CEA (French Nuclear Research Agency), HAPTION benefits from results and know-how developed in more than 30 years of research. HAPTION designs, manufactures and sells haptic devices with professional quality, suited to the needs of its customers, both industrial and academic.
A haptic interface is a computer device, which enables its user to interact with a software application or with a virtual object through the sense of touch. It consists in an articulated mechanical structure with motors and position sensors, as well as embedded electronics. The user holds the end-point of the structure in his hand, and can move it around, both in the real and in the virtual world on the computer screen. Whenever his virtual hand makes contact with a digital object, a force value is sent to the motors, which simulate a real contact.
Our products provide force-feedback on all 6 degrees-of-freedom (translations and rotations). Only 6-dof force-feedback enables realistic interaction between 3D objects.
Haption is a founding member of EuroVR, the European Association for Virtual Reality and Augmented Reality. Jerome Perret, Managing Director of Haption, is leading the Special Interest Group on Haptics (Haptic SIG) within EuroVR.

The talk introduces recent work of Würzburg’s HCI group at the Translational Neurotechnology Lab of the University of Freiburg. We will begin with a discussion of the general psychophysics of Virtual Reality and specifically of Avatar Technology and how they are useful for immersive human-computer interfaces enabling studies of, e.g., Presence, believability, Interpersonal Synchronization (IPS), the Illusion of Virtual Body Ownership (IVBO), or emotional response. Several examples will highlight the influence of embodiment and avatar appearance in Virtual Reality on these effects. The talk will illustrate potential obstacles as well as solutions to generate believable embodiment, e.g., how to generate life-like avatars and their animation in real-time. This is followed by a short reflection on timeliness as a critical requirement of the simulator technology to provide reusable and timeliness-aware systems controlling latency and jitter, pressing problems for many VR and AR systems. We will see how API-usability is strengthening the software quality of Real-Time Interactive Systems (RIS) in general and of multimodal VR systems specifically, and what we can expect from today’s operating systems and programming languages in terms of required timeliness given concurrency conditions. Along the way, we will have a look into typical applications of immersive systems, i.e., for therapy and training as well as for computer games and their serious application. 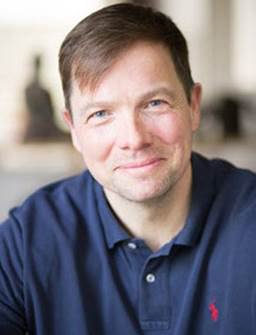 Marc studied mathematics and computer sciences at the University of Paderborn, the New York Institute of Technology and the Bielefeld University. After several accompanying years in the computer business, he received his PhD in 2001 in the area of multimodal–gesture and speech–interaction for Virtual Reality.
He headed the AI & VR Lab at the Bielefeld University until 2007, became professor for media informatics at the University of Applied Sciences (HTW) in Berlin, and founded the Intelligent Graphics Group at Bayreuth University in 2009.
Marc holds the chair for human-computer interaction at Würzburg University since 2011. His work is interdisciplinary oriented towards human-computer interaction interconnecting real-time 3D graphics and simulation, virtual and augmented environments, Artificial Intelligence, and cognitive sciences.